Well if you haven’t heard the CrunchPad is dead so tears aside, here are my new infatuations that will hopefully do just as well (and actually become available): The K.R.T. X9 Tablet with Windows 7, The Vega Tablet with Androi and the Camangi WebStation Tablet with Android.

And now, without further adieu, here are the specs, other details and expected release dates for all of these beauties:

This puppy is the first Windows 7 Tablet to feature multi-touch support but at 2kg the KRT X9 is a beast!

The Vega Tablet is on its way in 2010 and it appears it is definitely a go but it will only be available to “tier 1 carriers” (i.e. Sprint, Verizon, etc.) in the States when ICD launches it in the first quarter 2010 according to this Gizmodo article; okay it didn’t say not Canada but come on… it is doubtful we will get it so quickly.

The following specs are for the 15 inch version listed here. 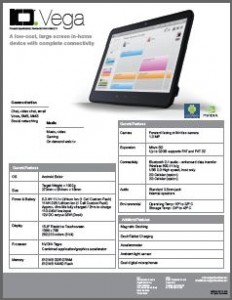 The WebStation reminds me a lot of my Nokia n800 Tablet due to its layout but it sure seems to be a decent little gadget – not my thing because it isn’t big enough but worth showing since it is actually available this Christmas (or so they seem to say).

1 thought on “2010 Will Feature the Vega, KRT X9 and Camangi WebStation Tablets”