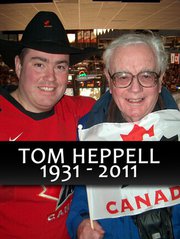 The Ten Word List was a huge contributor to the decent vocabulary I have today and I can’t thank him enough for that. Of course, this was only one of many ways Tom Heppell was a great teacher but it always stands out in my mind. END_OF_DOCUMENT_TOKEN_TO_BE_REPLACED 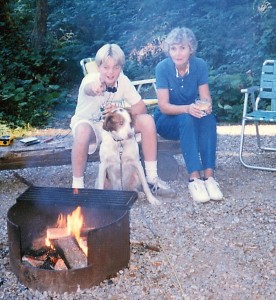 Barely one month after my Pa passed, so did my Gram today; on July 27, 2010 just after 4 in the morning after a massive stroke at lunchtime the day before. My heart creeps up into my mouth when I think of so much loss in such a short time; it is barely manageable when I allow myself to think about it. Instead of just mourning, however, I feel I need to tell my story of my wonderful Gram.

When I was born my five year old brother, Mark, fell ill with a serious case of meningitis which put my family into a state of disarray; a new born plus a gravely ill child – what a nightmare. Thankfully, my parents had my Gram & Pa who looked after me when necessary; while my parents went to and from the hospital to watch Mark’s meningitis threaten to overwhelm him. It took a while but fortunately my brother survived and lives a wonderful life today. Throughout that time, I am sure my parents would never have known what to do without my Gram and Pa to fall back on. And so my wonderful connection to my grandparents began… I spent many evenings and many days in their home throughout my life and I enjoyed it immensely.

Their home was their children’s home. My Pa built it himself and it stands on a beautiful piece of property on END_OF_DOCUMENT_TOKEN_TO_BE_REPLACED

Today, I watched as my Grandfather passed away. 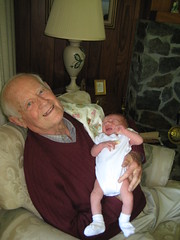 Monday, June 28th, 2010 at around 12pm my wife, Sara, called me at work to relay a message that the time was near for my Grandfather and that as soon as Ian (my Uncle) arrived from Nanaimo, he would be taken off oxygen. My Mother had left the message and the gist was that if I wanted to be there for his final moments I could. It took me a while to gather the courage but I headed to the hospital to be there, where I had some private moments with him as he lay unconscious with my sweet Grandmother who was always at his side.

At the hospital, time seemed to move as a ball might on an irregular, steep, yet thickly viscous surface; one moment time seemed to barely move, and at times it flew but always with a sense of foreshadowing. Nearer to his passing time seemed to disappear altogether in a peaceful way. I won’t share any further details of his passing other than it was all that any family-focused person could hope it would be, because he was surrounded and held by his loving family to the last moments. END_OF_DOCUMENT_TOKEN_TO_BE_REPLACED

Ever since I watched the incredible adventure-documentary movie Sharkwater I have been profoundly motivated to do whatever I could to help save sharks. In fact, the very same day I watched the movie I purchased a few domains with the intention of creating at least one website to do my part and raise the awareness of shark finning. Well the day has finally come. The site isn’t perfect by any means yet but you can visit AntiSharkFinning.com to get regular updates on shark-related news and the fight to ban shark finning world wide. I hope you like it.

If you find yourself overwhelmed and dying to help out please check out the following websites to learn more about what you can do:

On July 21st, 2007 I was fortunate to marry my greatest love and soulmate Sara Martin. This is the video of our wedding, I hope you enjoy it.

A video used to be embedded here but the service that it was hosted on has shut down.

I hope you enjoyed the video and I want to thank Mark Planiden for helping us with this great camera work. It turned out extremely well and we really appreciated his talent!

Photos of the wedding taken by our photographer can be found here and are available for orders from the photographer – let us know if you would like a copy of a particular shot.