How times have changed since I met Matt in grade 9 and all of that has happened since… and now a proud father with a beautiful wife and child. Good work my friend! You are going to make an amazing father! Huge grins 😀

Okay, I am officially buzzing with positive energy 🙂 Morgan Williams (middle name will be added later) was born this morning, Feb 2nd at 6:05 am as I was just told a few minutes later by her proud father and my dear friend Matt (I got to hear her too!).
This marks the first baby in the ranks of my closest friends and I can’t be happier.

CONGRATULATIONS MATT & CARLA and a big HELLO to Morgan from a friend for life.

It is rare to find a charitable organization where 100% of your donations is guaranteed to go to the charities. GiveMeaning.com appears to be one of those organizations.

Here is a link to GiveMeaning.com’s “About Page” where this incredible company is well described. In addition, here are some inspirational success stories from GiveMeaning.com.

Normally I am simply not a person who promotes this kind of thing… I guess I am just too busy and a bit suspicious of large charities. I am normally more interested in local charities like the Mustard Seed. This one, however, really inspires me and I felt it was important to share. Here are some recent projects that were completed thanks to the generosity of users:

What I find really different about this project is that if I wanted to I could create my own project to raise funds for a charity of my choice. Lets say, for example, I felt particularly interested in raising money for Multiple Sclerosis. I could simply create my own project and then GiveMeaning.com (after approving the project) would handle all of the logistics of handling the money, charity receipts, and making certain the funds got to the appropriate charity. So in a sense, GiveMeaning.com acts as a charity administrator thus allowing me to focus on the more important aspects of fundraising – promotion! But it doesn’t stop there! GiveMeaning.com even provides excellent tools to help you get the word out – all free of charge.

Check it out and tell me what you think… personally I think it is an awesome concept. Heh, probably one that has been around and I didn’t even know about it. Well call me enlightened now 😉

Anna-Marie is an inspiration… yes I am sure she gets that one all of the time but it doesn’t make her any less worthy. I have known Anna-Marie since Grade 8 and she always stood out as a friendly person and a star student. Throughout our years in High School I also became aware that she was also a fierce sports competitor; by listening to the morning PA in TAG and hearing about her extraordinary field hockey exploits. Anyway, here we are today with Anna-Marie kicking arse in the world of rowing. Over the past couple years I have been lucky enough to be on her personal email list where she recounted her struggles over mind and body to become a world champion rower. Everytime I read her emails, and I mean everytime, I was absolutely startled by the commitment that she had to a sport that was relatively new to her; she was originally a field hockey star and found rowing late in her University days (at least I believe that was how it happened).

Well her hard work has paid off this Tuesday, November 7th 2006; Anna-Marie edged out famed Olympic athlete Buffy Williams as Canada’s Singles Champion. Congratulations seems a weak word in the face of her latest feat. But CONGRATULATIONS ANNA-MARIE!!!

Here is Anna-Marie’s email, I hope you will find it as inspiring as I did because it says a lot about human nature and what it takes to overcome intense physical and mental adversity. Hell, I found myself breathing hard just imagining the intensity of the race. Well done!!!!!!! 😀

Holy crow! What an amazing race. Buffy Williams and I, side by side for 7:51 seconds. They took a long long time to decide who’s bow ball actually crossed the finish line first – I ended up edging Buffy out by 0.14 seconds at 7:51.40. She finished at 7:51.54. We didn’t know officially for over an hour who had actually won the race. One of the coaches biking along the path beside the race said that he swore that there wasn’t even 3 strokes in a row the entire race (probably about 300 strokes give or take in a W1x race) when our bow balls weren’t jostling for position out in front. All I knew is that Buffy wouldn’t let up, and I certainly wasn’t going to!!! Even after we crossed the line and heard two incredibly tight blasts of the horn indicating that we had finished we had no idea who had actually finished first. As I was cooling down, I realized that it really didn’t matter at that point – whatever the outcome of the race, it couldn’t possibly top the excitement and intensity of the race itself.

The gold medal and the title of 2006 Canadian Champion in the Women’s Single (and the $650 cheque) are simply icing on the cake. I honestly felt so incredibly ecstatic with the whole process, that the result is really just a bonus. What a neat idea. After a summer and early fall of really feeling like I was struggling with everything about training, competition and this lifestyle, I finally came to the conclusion, thanks to my Sports Psychologist, Dr. Sean Richardson, that basing my feelings of rowing and training on my results (whether practices, time trials or races) really wasn’ t a productive way to go about it. Especially when the results I wanted weren’t happening. I began to lose my motivation and started seriously questioning my desire to continue. I knew what I wanted from myself and what I wanted to achieve with rowing, but really felt like I didn’t have the energy to pursue it. The goals I had set were too lofty or too easily achieved, so I rapidly lost motivation to continue.

I started to look at why I was really doing this. I came up with something so simple, that it got lost in the intensity and competitiveness of this environment. Over the past 6 months, my ego has been attempting to stay alive and healthy by winning and being the strongest, fastest, fittest out here. I had lost sight of the most important aspect that I wish to gain from this whole experience – to become the type of rower I would like to race against. I want to become the type of rower who can win or lose gracefully – without excuses or an over inflated ego. I want to be the type to be able to appreciate when somebody else has a fantastic day, even if mine was horrible. I want to be the type to recognize when I have a good day and somebody else doesn’t. I want to be the type of rower – and more importantly the type of person – who is approachable, can honour somebody else’s skill without necessarily comparing it directly to mine in a sense that one is better than the other. Don’t get me wrong. I love to win. I love that feeling of being the fastest, the strongest, the fittest. It’s a pretty sweet thing to come out on top – especially after a season of struggling. But for me, that alone cannot sustain me in this sport. The process of this goal is the key – because each day, each practice and each race will challenge me to become the rower I want to become. It’s almost like making a lifestyle out of it.

I realized this evening that the whole process of the race – loving each stroke (even though I wondered WHEN ON EARTH is Buffy going to drop off and when on earth am I going to finally pull through her) was what really made it a great race for me. Each time I glanced to the side and saw her still sitting right next to me, and I chose another technical focus to work on for just ten more strokes because maybe THESE ten strokes will finally put me ahead just a little bit… only to look up in ten strokes and see her in exactly the same spot to go through the exact same decision making process of “ok, maybe these next ten for ‘core’ will really put me ahead”. Over and over and over… all the way to the last 20 strokes when I really wasn’t even sure what I was doing anymore, just that I had imagined this scenario over and over in my head and I knew that I could do anything for 20 strokes…. Then even minutes after it ended, knowing that regardless of the result, I really enjoyed it and had given it everything. At the line, it was really just the fact that my boat surged at the right moment to put it over the line ahead of hers. I felt a brilliant moment of clarity to realize that it didn’t even really matter to me the placing. Or perhaps, better stated, I had decided how I felt about the race before the results were ever official.

On a side note, my goal earlier this year was to be able to finish 10-15 seconds ahead of the next woman at Speed Orders in June 2006. I wasn’t able to compete at that regatta in June due to my rib stress fractures, but Buffy (who wasn’t competing this summer)and I finished 13 seconds ahead of the next woman today. I achieved that goal…. a few months late, but I can now check it off. I’ll still have my result oriented goals, however the process oriented ones will be the daily challenges!

Thanks for hearing me out on this long email!

You can’t tell me that you were anything short of inspired by that email right?! 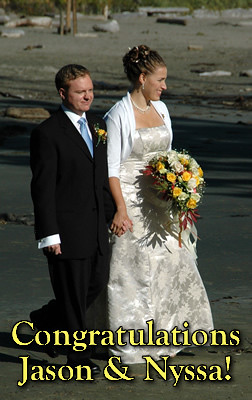 Well the weekend getaway at Pacific Sands Resort went off without a hitch. There was some concern when the weather was a bit dodgy on Friday but I am sure it would have done nothing to sway Jason and Nyssa’s thirst for adventure. After all, they wanted a wedding that reflected their west coast passions… what better than a Tofino downpour! Although perhaps the white wedding dress might have proved more revealing than desired 😉

Anyway, the accommodations may have been luxurious (this was our sexy villa) and the drive a bit pressing on the arse but the wedding was well worth it. Jason was dashing and Nyssa was ever the princess on this fine day at Cox Point in Tofino.

When the opportunity was afforded me I never found the voice to say much in the way of words about my long time friend Jason and I imagine I will regret that for a time. That said, if there is one thing worth saying it is that there is no question of his deep love for Nyssa. Ever since he met her he has been by her side, be it in Victoria, Vancouver or even Montreal. And moving to Montreal is saying a lot; I was in french class with Jay and know first hand that his french is merde!

In short I would like to wish my old friend and his gorgeous bride a wonderful Hawaiian honeymoon and a long and happy life filled with joyful anniversaries, lampoon vacations, stinky diapers and many well-basted shish kabobs.

Sara and I both look forward to hanging out with you soon. Here are the few pictures I got of your wedding if you want to see them… although it appears you will have a couple thousand to wade through. That was a ton of photos your photographer took for you… kudos on the deal.