So I am a huge Hulu fan. Ever since I experienced this free TV service in the States I have been unreasonably jealous of my American brethren. I am also hurt that Hulu shirked its polite neighbor nation 😉 (I mock, since I know it is actually just stupid copyright laws getting in the way).

UPDATE, July 2011: I was contacted by Nick from UnoTelly.com and it seems he has a solution since this one I documented below no longer works. He does charge for the service but it is seriously cheap ($22 for 4 months last I looked). Check it out! If you are not wanting to spend a penny, I understand, you may find an answer or two in the comments. Cheers! Ross

<Sorry, I have been informed the following strategy no longer works unless you purchase Identity Cloaker>

Anyways, I found out from a great article that if you use Identity Cloaker’s Secure Shell program (that comes with the paid service) you can get access to Hulu without any problem at all. VERY cool. I figure this can come as great news to anyone who wants to drop cable in favor of online TV with fewer commercials.

Anyway, go to Identity Cloaker and setup an account or sign up for the 10 day trial and see if you like it. So far as I can tell it is the only service that has been proven to work with Hulu in Canada!

Here is the most important section of the tutorial I found:

… Identity Cloaker comes bundled with a customised version of OpenVPN. From the Identity Cloaker console screen you can start up OpenVPN and select one of the US Proxy Servers to connect to, I chose an East Coast server for testing as I was in the UK at the time of testing.

Important – You’ll notice that there are lots of servers you can connect to (new servers get added all the time), but for watching Hulu and any video streaming it’s best to use UDP (User datagram Protocol) rather than TCP. Don’t worry it’s quite simple, make sure you choose one of the MAC compatible servers (even if you’re using a PC) to connect to as they all work in UDP, it’s a much quicker protocol for streaming video than TCP – so you’ll get better results. 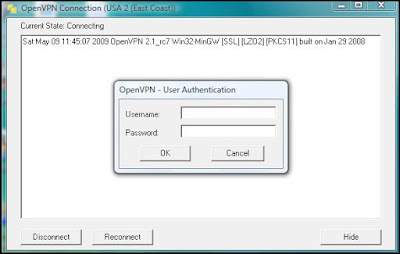 Just sign in here with your Identity Cloaked account and then your entire connection is streamed via that server, and of course compressed and encrypted to make you completely anonymous as well.

This should make me look completely indistinguishable from a US Internet Surfer, so I dashed off to Hulu to try again. This time I thought I’d try and watch a new episode of Family Guy to test my connection. So I made sure my OpenVPN connection was working (you’ll see two little computer icons in the task bar – green when connected)

This was the result of using Identity Cloakers Open VPN connections –

As you can see it works, and it worked very well, Identity Cloakers US Servers seemed very quick and if you were trying to watch Hulu from Canada they would be even quicker. I generally get one little pause to buffer the video stream per episode but that will vary depending on your connection. Open VPN connections can sometimes be sensitive to upload speeds but I didn’t get a problem with that at all.