There are few words to describe the power involved to trigger such an event… holy crap!

NOTE: if your computer can take it then I highly recommend increasing the resolution of this video to 720p and running it in full screen. END_OF_DOCUMENT_TOKEN_TO_BE_REPLACED

This video from the Associated Press is exhilarating! I have flown over moving lava before but this would be outstanding!!! 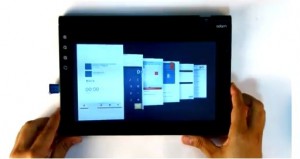 I received an email today that my Notion Ink Adam is delayed. I am definitely dismayed but I can’t fault chance and I appreciate the effort Notion Ink’s team is putting into getting the product to me soon. I am genuinely looking forward to having a unique and ground breaking tablet.

We understand that you have been eagerly waiting for the arrival of your Adam. However, we regret to inform you that a fraction of our touch-screens got damaged during transportation due to which your shipment has been effected.

The Chinese New Year holidays that are in the first week of February further add to the delay. However, our touchscreen partner, Sintek, have agreed to work through the holidays and deliver the screens as soon as possible. We are afraid that until we receive these touchscreens, your device would not be ready for shipment.

The estimated date of your shipment would be 14th February 2011 (Buffer included).

We thank you for your continued patience and co-operation in this matter.

If you don’t know much or perhaps anything about the Adam Tablet you can’t be faulted… it is definitely not a big name brand yet. Here is a review of the Notion Ink Adam from Slash Gear that is bound to give you some understanding of how cool this product is.

The Ten Word List was a huge contributor to the decent vocabulary I have today and I can’t thank him enough for that. Of course, this was only one of many ways Tom Heppell was a great teacher but it always stands out in my mind. END_OF_DOCUMENT_TOKEN_TO_BE_REPLACED

One thing I miss from the days when I had more time, less injuries, more expendable income, and frankly less responsibility was the excitement of adrenaline-driving adventures. This particular movie of paraskiing got me panting with envy… OMG sooooo cool! END_OF_DOCUMENT_TOKEN_TO_BE_REPLACED