Update as of Sept 16 at 1:36 PM: Thanks to my readers and Facebook friends this article got enough social play to earn the attention of the Office of the President of Rogers which contacted me and resolved the entire issue within a couple of hours. They also extended to me a $100 credit for my trouble. I now have my new phone and I love it… despite the mess required to obtain it. This does nothing to excuse the amount of effort this took to get the appropriate attention but I did appreciate their efforts and will continue with Rogers for now; if simply for the convenience of not having to switch. I hope this experience and its ultimate conclusion assists others if they encounter the same situation.

Rogers Wireless, you are GREAT at pissing off your customers!

I hope anyone reading will share this article to warn others of the service they can expect. Even after being with Rogers for over 12 years! 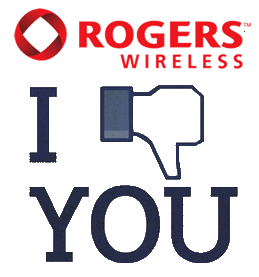 I chose to upgrade my Rogers Wireless phone by calling in rather than risk a long line up in the store… HUGE mistake. I have faced nothing but ridiculous excuses around the upgrade of my new phone and its lack of arrival. Apparently it is back-ordered and they can’t cancel my order so I can pick it up at my local store which has stock.

They told me the phone would arrive in 5-7 business days, it is now the 9th business day, I have no phone and I have been told it will take another 5-7 business days for them to figure out how to cancel my original order at which time I can then go and spend more time at the local store to finally get my upgrade (if it isn’t out of stock by then). Complete and utter incompetence laden with bureaucracy. I am now seriously looking at Telus for my cell phone needs… not that it is going to be that much better I expect but perhaps a lesser evil.

But it isn’t nearly that simple… you should see how badly they dicked me around. Here is a (believe it or not) shortened version of events:

I ordered the upgrade which was due to arrive in a few days. Seven business days later, nothing. I call, they say they don’t know what is going on but it appears to be on backorder. I am furious because earlier calls prompted them to tell me it was en route but they didn’t have a tracking number they could share.

After some calling around I called them up again and asked them to cancel the order I made so I can just go to my local store and pick it up because the phone was in stock there (the way I now know I should have done in the first place)… no problem they said. I had to run to a meeting and the agent said it was okay, he would get it canceled and I could go to my local store and pick up the phone.

Later I arrive at the store, they bring out the phone I am so looking forward to (the HTC One M8) and we begin the upgrade process… “there’s a problem” says the nice rep at the store. It turns out they can’t give me the phone because I need to call in again… no reason given. Grrrr, so I have to leave the store without my phone to call them later when I had more time.

I call in from home and find out the phone is on delivery so it can’t be canceled. After everything I have been through with it being “on delivery”, then “back-ordered”, and now it is on delivery again??? WTF! So I dig deep and question the hell out of the rep. After he goes to “management” a few times he finally comes back and says no, it is actually on backorder.

At this point I am in full Rogers Wireless hatred mode!

The rep then tells me it will be canceled in a couple of days and then I can go and pick it up at my local store. I ask if that includes the weekend or if it is just business days. He goes away for another 10 minutes (on-hold hell is now totaling 45 min easily) only to come back and tell me… (wait for it)… it will be canceled in 5-7 business days MORE! So not only did he know nothing when he gave me the first estimate but now (without any apology by the way) he tells me it will take another work week at least to have the order canceled. Then, after all of that I will go to my local store to pick up the phone.

Gods have mercy… how can a business stay afloat treating its customers like this? Rogers Wireless, congratulations, you are GREAT at pissing off your customers!