The longest solar eclipse of the century

Earlier today, the moon passed directly in front of the sun, causing a total solar eclipse that crossed nearly half the Earth – through India, Nepal, Bangladesh, Bhutan, Myanmar and China. Today’s was the longest total solar eclipse of the 21st century, lasting as much as 6 minutes and 39 seconds in a few areas. Despite cloudy skies in many of the populated areas in the path, millions of people gathered outside to gaze up and view this rare event. Collected here are a few images of the eclipse, and those people who came out to watch. (33 photos total) 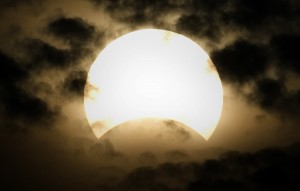 You must go to this page from the Boston Globe to see more… what a wonderful collection of photos! Here is the link: http://www.boston.com/bigpicture/2009/07/the_longest_solar_eclipse_of_t.html